Hopefully you’ve had some time to recover from all the Harlem Shake videos over the last fortnight, and perhaps you’ve even had time to latch onto the new internet meme, singing goats. Sounds ridiculous but I can’t quite express how funny they are, and Mike’s blog has picked out some of the best.

For all the Corporates out there looking for some awesome prizes in a silent auction, check out MonSTaR Foundation’s Auction items. These are some seriously cool prizes, like the chance to get on Wild Oats, the amazing Sydney-Hobart winning yacht. I’m a proud member of this Foundation as they support the amazing work of the STaR Association, which my little girl Angelique is a lucky beneficiary of their programs. Any bid or donation would be greatly appreciated.

There’s no shortage of interesting features in digital either, here’s the fortnightly round up:

It was a social phenomenon last year, attracting more than 75m views across the globe. It’s been 12 months since KONY became a household name (for some) and the organisation behind the message, the Invisible Children, have released an update identifying the outcomes and commitments as a result of their work. Awareness at its greatest and any reduction in youth deaths has to be a sign of success.

The Year Ahead in Creative Technology

It’s no surprise that the biggest barriers marketers face with creative integration is the adoption of new technology. I read about it every day and in every report. I’m always teaching that creative needs an integrated approach with a customer centric view. Creative needs to embrace the technology that the consumer is using, allowing technology to deliver an “experience” with the consumer. 12ahead have put together a great webinar, talking to global creative technologists about how brands should be approaching creativity and how technology has changed the landscape. There are some lovely case studies across various industries to learn from.

I’ve mentioned several times the ongoing trend of crowd funding spitting out fine projects with great success in the technology/hardware sector. We can now see this success filter through to the film industry, with Inocente making history as the first Kickstarter-funded film to win an Oscar, for Best Documentary Short. What other industries are there crying out for attention and support? I would think most of them and I’m looking forward to see the next leap of faith from the general public.

Did Madonna Get Social Media Wrong?

According to Instagram, it appears she did. With all the minders and support team you could imagine, Instagram warned Madonna about her posting of pictures – which may not belong to her, and may in fact breach the community’s guidelines. With the plethora of celebrity stuff ups to learn from, can you really excuse the actions? Or do you just turn a blind eye because that’s what you’d expect from Madonna? The rules are the rules….

When the co-founder of one of the biggest mobile manufacturers sells his entire share, it’s simply got to make you take notice – particularly when he sells up before the launch of the Z10 Smartphone handset.  The mobile market is in fierce competition and it appears BlackBerry may have worked out that their place is limited. In my opinion, the brand failed to listen to the consumer and to follow the needs and utility of that consumer – and now I think it’s a little too late. Outside of banking and pharmaceutical organisations, I don’t know anyone who has “chosen” a BlackBerry as their preferred handset. Do you know someone who has?

Now why it’s taken this long for a retailer to be FABULOUS is a question for another day. H&M are leading the way with a recycling program – where shoppers can bring any bag of used clothing into H&M and get a coupon for 15% off their next purchase. The clothing can be from any brand, in any condition. This is a sure-fire way to ensure customer loyalty and no doubt increased basket value, making affordable fast fashion even more accessible. Need foot traffic? Need to be more than a showroom? Need to provide a destination with a reason? Massive pat on the back H&M, I can’t wait to hear the stats on this adventure. I expect a big BOOM.

Exchange Tweets For A…… 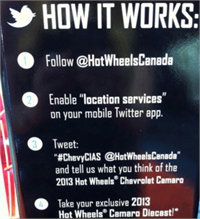 The currency of tweets is not a new thing, but we are seeing a growing trend of tweet payments. The latest brand to jump on board is Hot Wheels, dispensing toys via a vending machine for geo-located tweets. Dubbed the “Trending Machine” (cute), 1,500 Canadian visitors to the International Auto Show received an exclusive diecast model of the Camaro in exchange for a tweet.